The Acer V5-571P (Model MS2361) was adequate for those wanting a touchscreen 15.6" laptop on a fairly tight budget as it ticks many of the boxes - Core i3-3337U processor, 4GB of DDR3 RAM, a 750GB hard drive and the screen while not comparable to modern offerings is absolutely fine, including the touch response. While not being the brightest candle in the pack specification wise, it's what you'd expect at that price point. Not likely in its design is a long lifespan and this laptop was released in 2012 which I am sure we all remember as the year when David Cameron managed to leave his eight-year-old daughter in a pub. She can now/soon visit the pub without David, so that must be a bonus.

This laptop came in with a charging fault - the power socket was a little floppy in the chassis and it would not power on. Common procedure to reduce delay is to order the power socket before the laptop arrives, fit a new socket and problem solved. The client mentioned that the laptop had been dropped so the plastics were not in good shape. On investigation, I found the reason for the looseness of the socket is the plastics that hold it in place had been bashed to bits so the socket was able to move around. Purchasing the socket wasn't a bad decision as they are cheap enough and the power cable was a bit loose inside the socket anyway. 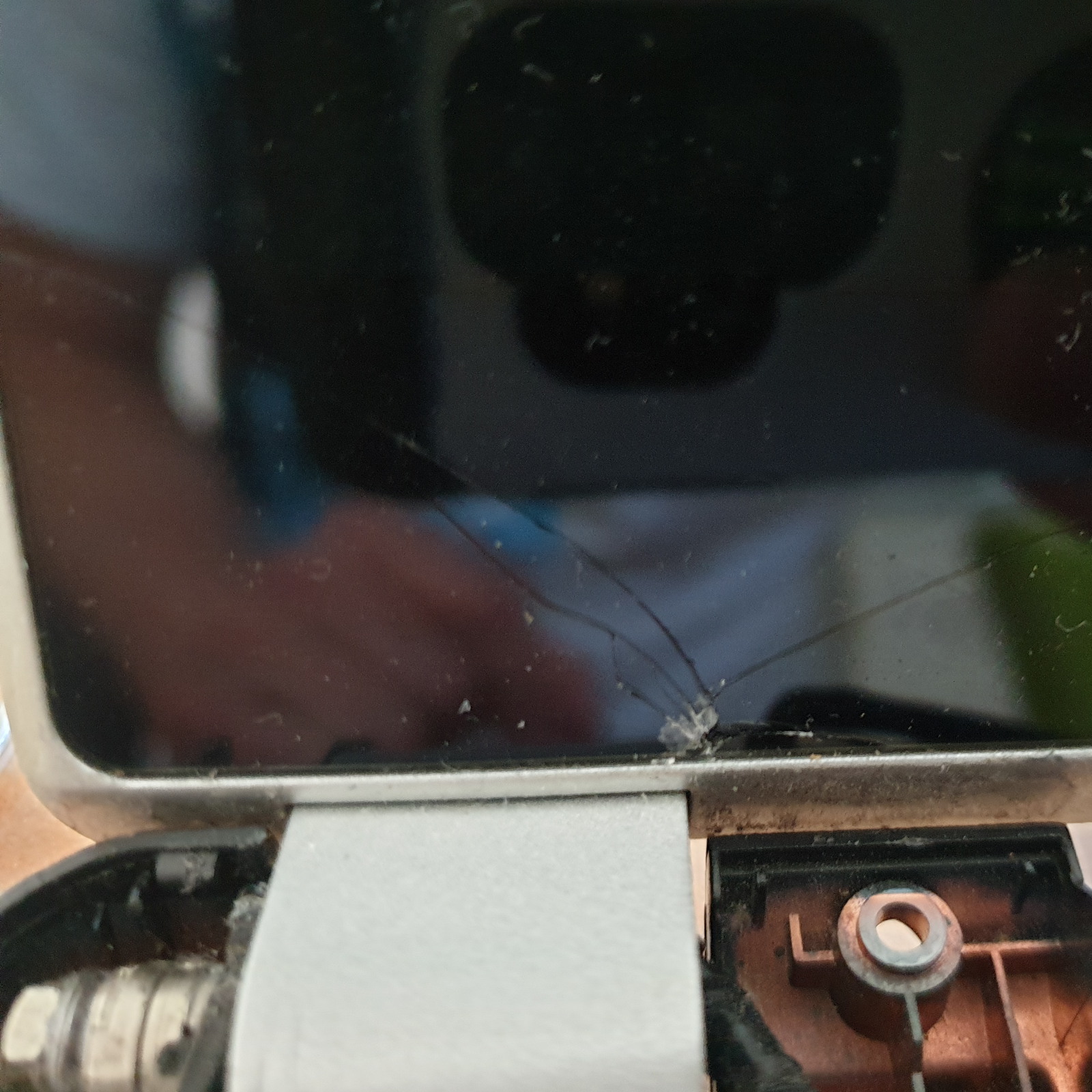 Mild inginuity can sometimes secure the power socket in place but unfortunately, that was not the only damage as either through impact or from plastic fatigue, the lugs that secure the left screen hinge to the base plastics had completely ripped out meaning the screen had to be opened with a lot of care as it was putting pressure on places that shouldn't have and ultimately this led to a cracked screen. It didn't end there - the top cover has several broken clips and some aesthetic damage and all the screws from the underside were missing.

So, what we have is a laptop that needs a touchscreen assembly, base plastics (which means a complete strip down of the laptop), power socket and either a repair or a new top cover. In all but a high-end laptop this makes it beyond economically viable when you consider the age of the machine, cost of parts and labour and that, at the time of writing, you can pick up the same model on eBay for £140. But this is not what the customer wanted - being ecologically minded, she wanted to make the best use of the parts she had and replace what was required.

Laptop stripped and base plastics above ready for the transfer: 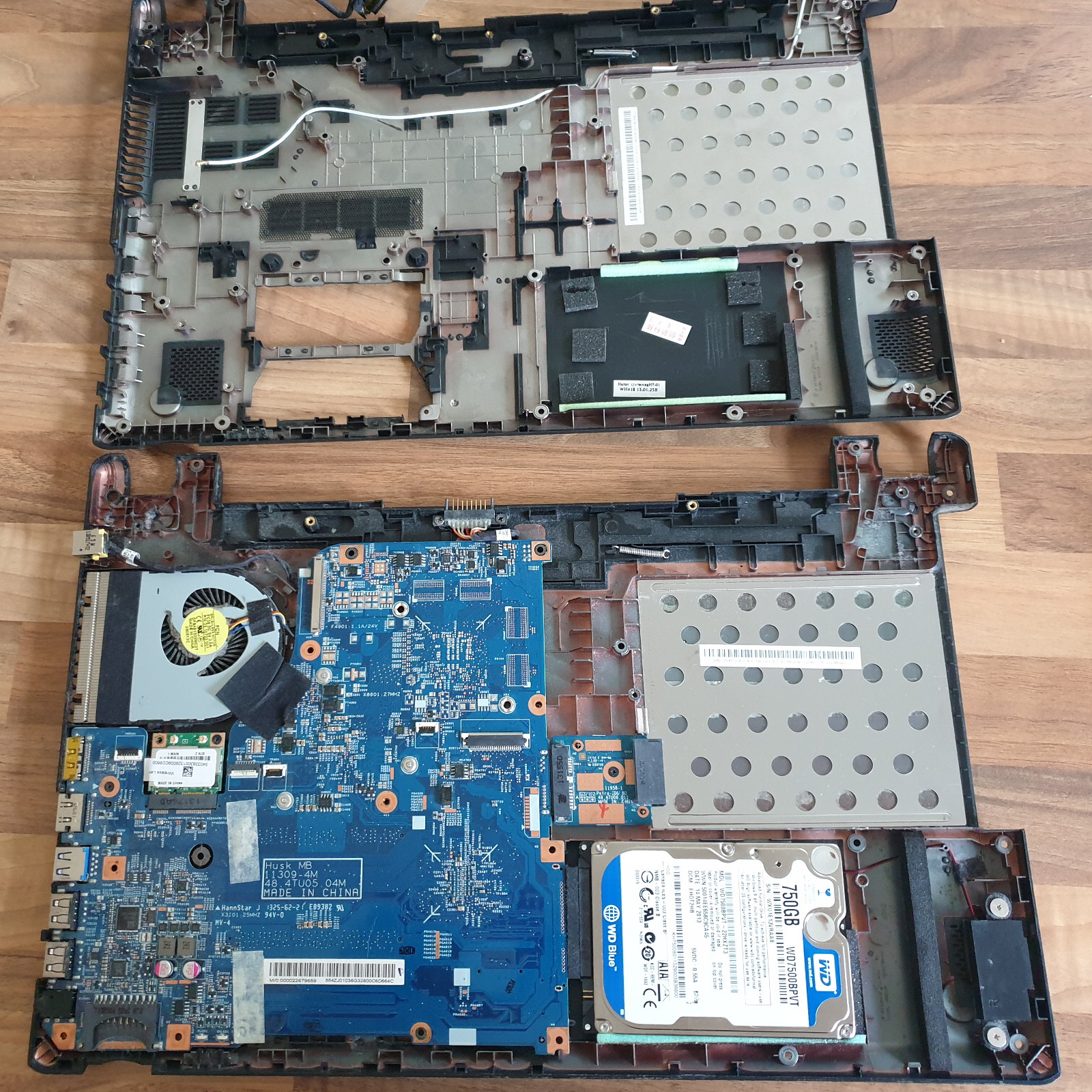 Onto the challenge of finding more parts and screen assembly was easy - plenty of graded screen assemblies from reputable places. You *can* replace the digitiser alone, but it's easier to swap the entire assembly. Hinges and other bits were swapped over and the screen was put back in the box while awaiting other parts. The next challenge was the base plastics - no longer made by Acer of course but there was a UK seller that had the base plastics and specifically said it was for the 571P - the 'P' denoting the touchscreen model. It was new-old-stock and a decent price so ordered but with ordering parts, it's best not to keep hopes up until the part arrives and it was indeed wrong - I suspect it was for the non-touch model of the V5-571 which has very different base plastics and not interchangeable - back on the hunt again. After some time and many enquiries, I sourced another new set of base plastics, confirmed suitable for this model but I had to wait for it to arrive from China - which it did in 3 weeks or so.

Some of the broken bits, most of which were lurking inside the laptop: 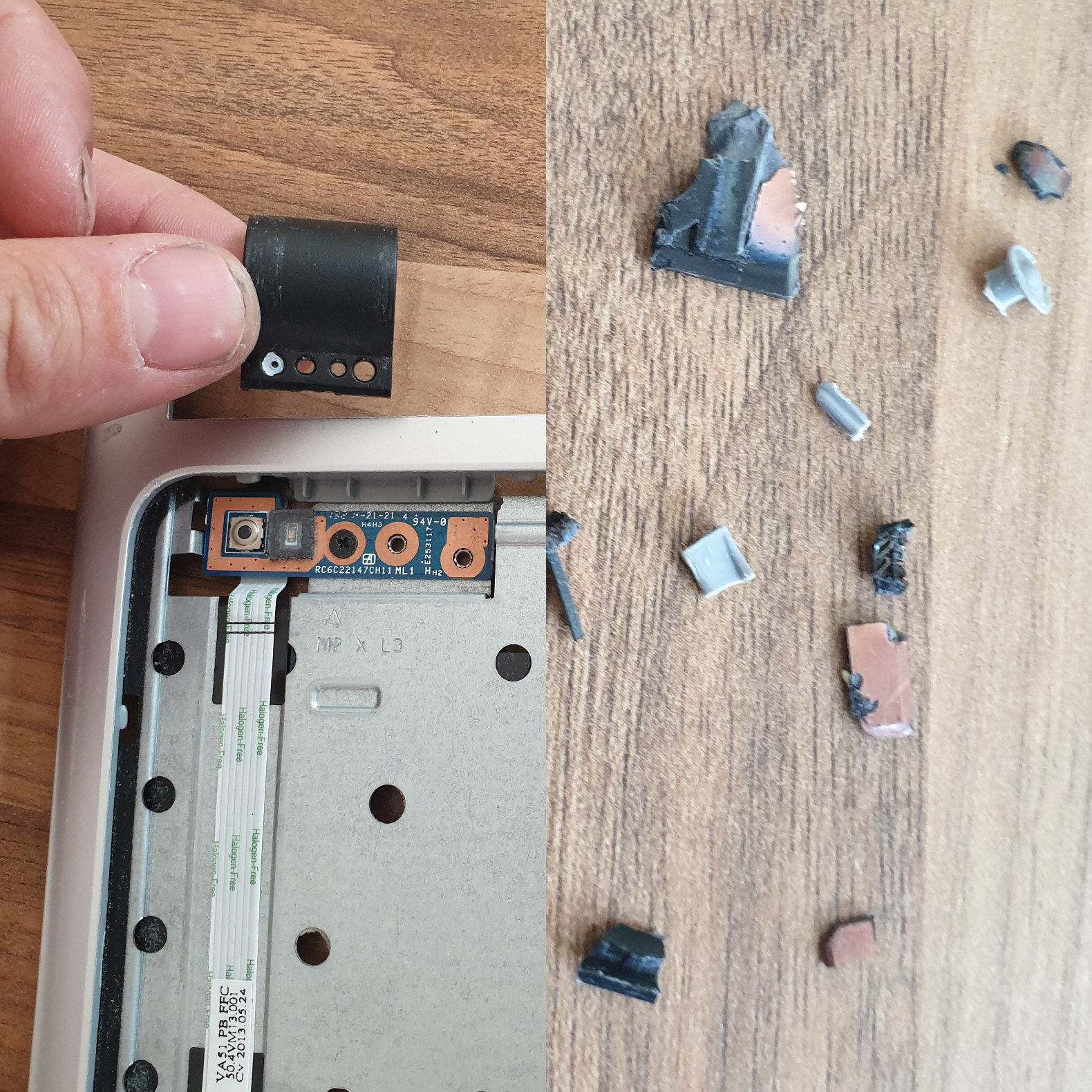 While waiting for the base plastics, I repaired the aesthetics and functionality of the top cover by gently bending in places back to a normal shape, gluing some of the clips back on and re-securing the hinge cover. It's certainly not perfect, but does the job required, and is what the client wanted rather than a replacement top cover.

Side to side and it was clear that this was the correct set of base plastics. I took many pictures throughout the disassembly which is something I thoroughly recommend if there's a chance of waiting for parts - where exactly did that cable route? Why have I got this screw with an odd head left over? It's much easier when you have a pictorial trace. The speakers and cable get fitted first, then the Wi-Fi antenna cables, then the motherboard, hard drive and then general re-assembly.

I tend to leave the top cover simply 'placed' on top of the base and leave the base unscrewed until it boots up fully into Windows and devices tested - is could be very irritating to find that a cable has made bad contact only to have to undo all the screws and clips again. All of the screws were missing from the base upon arrival which was a little odd, so replaced those.

It all worked (of course, we're experts don't you know!). It was pretty sluggish, as expected for an old laptop with a mechanical drive (it would benefit from an SSD massively but it's had enough surgery for now). Removed many items from start-up, removed some Malware and installed all pending Windows updates. Ran RAM and Hard Drive test for good measure.

To complete the base plastics, I transferred what I could of the stickers - I recommend getting them warm with a hair dryer before trying to lift them up with a pick. There is normally enough 'stickiness' left that they can be placed back on the new base, but keep an eye on it for a while in case they start to lift. And of course, I could not resist cleaning the laptop with Amberclens which is a product I have so much joy from, it deserves its own article.

The end result is a laptop rebuilt with some refurbished parts, some new and a fair bit of effort so from a financial angle it doesn't make much sense unless you can find a good used base cover and performing the labour yourself. From an environmental perspective getting a few more years out of this laptop must be better than purchasing a new one? If it lasts until Windows 10 is end-of-life in October 2025 it would have done very well. It's not necessarily a logic I would agree with as I see lots of old laptops come and go and I wouldn't get attached to one but I can also see the reasoning behind wanting to keep something going. 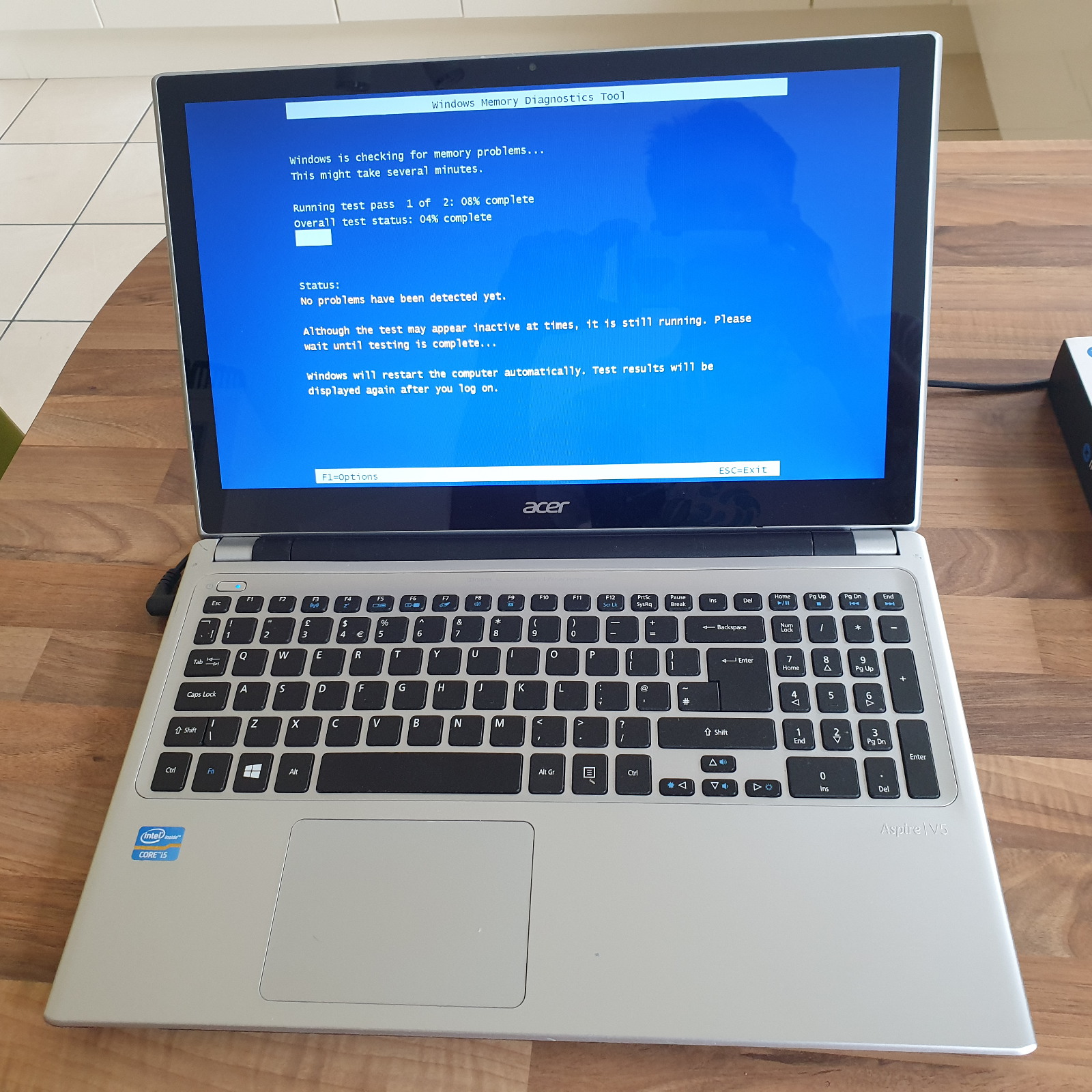 Could this be a trend as people become less willing to dispose and replace? The disposable culture is partial to blame for our current situation. It cost her £200 all in for the parts and repair - that could have been put towards a new laptop. But if this occasional-use laptop takes her through to 2025 I'd say that's pretty good from an environmental perspective. A quick scan on the web tells me that the average laptop lasts 3-5 years and typically on the lower end of that scale for lower-end laptops. If this laptop lives to 13 years it would have a far better carbon footprint than the average laptop, and that's all it is - an average laptop.

I am writing from an HP ProBook 450 which was up-cycled with an SSD and a RAM upgrade which would have otherwise been binned. It gets thrown in my bag most days and when not, whirrs away as my daily workhorse. It goes onto building sites, fields, plant rooms, balanced on fences and I don't need to be precious about it. Perhaps clients find it odd that the 'Computer Repair Man' doesn't use the latest, slimmest, lightest, fastest laptop? One of my top developers (built this website and others) works from an old Lenovo brick that most would pass as relic and not because he has to, but because he likes the way it feels. And his desktop? A 9 year old heap that we drag along and upgrade when needed, which isn't often.

Perhaps I can help with a laptop repair for your trusty faithful laptop that now needs a spruce-up, new lease of life or a repair? I'll be upfront about costs, expectations and timescale. I cover local areas such as Stamford, Oakham, Bourne, Grantham (I'm based in Corby Glen) but can stretch further afield or national by mail. Screen replacements, base plastics, top covers, speeding up Windows or in some cases, all of the above! 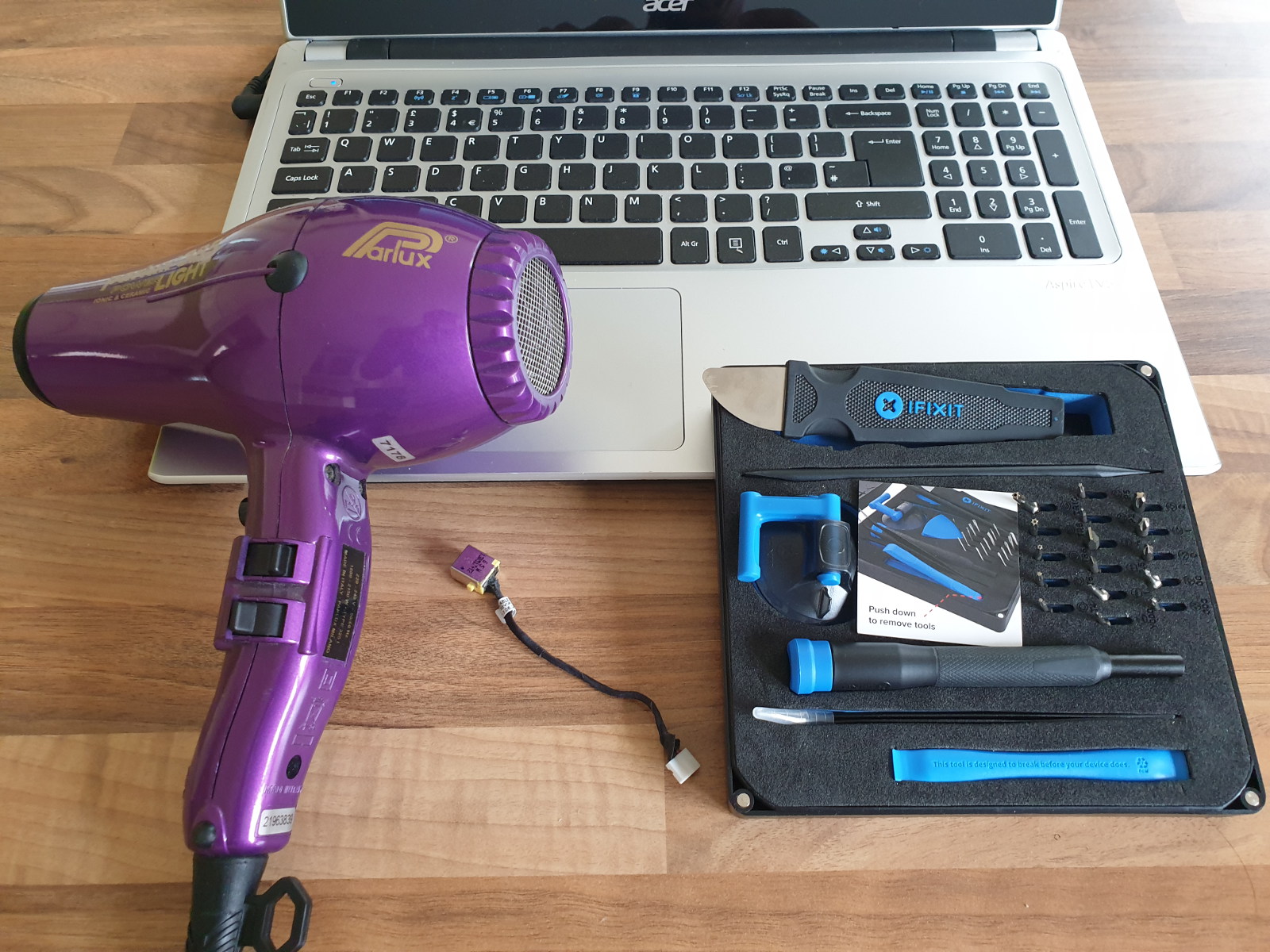