Requests of obtaining data from a broken hard drive or NAS are not terribly unique but this example I thought I'd write about as it demonstrates thinking a little outside the box (pun intended...NAS...box...OK I'll stop).

After sucessfully migrating data for a local client in Castle Bytham, Lincolnshire from an old Mac-Mini server to a Synology NAS including implementing secure backup to rsync.net and configuring VPN, I was offered up an old NAS to obtain the data from. To my knowledge it had sat for a while because it didn't work - that was about as much information as I could gather, other than the user/pass to login and that it might have a habit of munching power supplies. 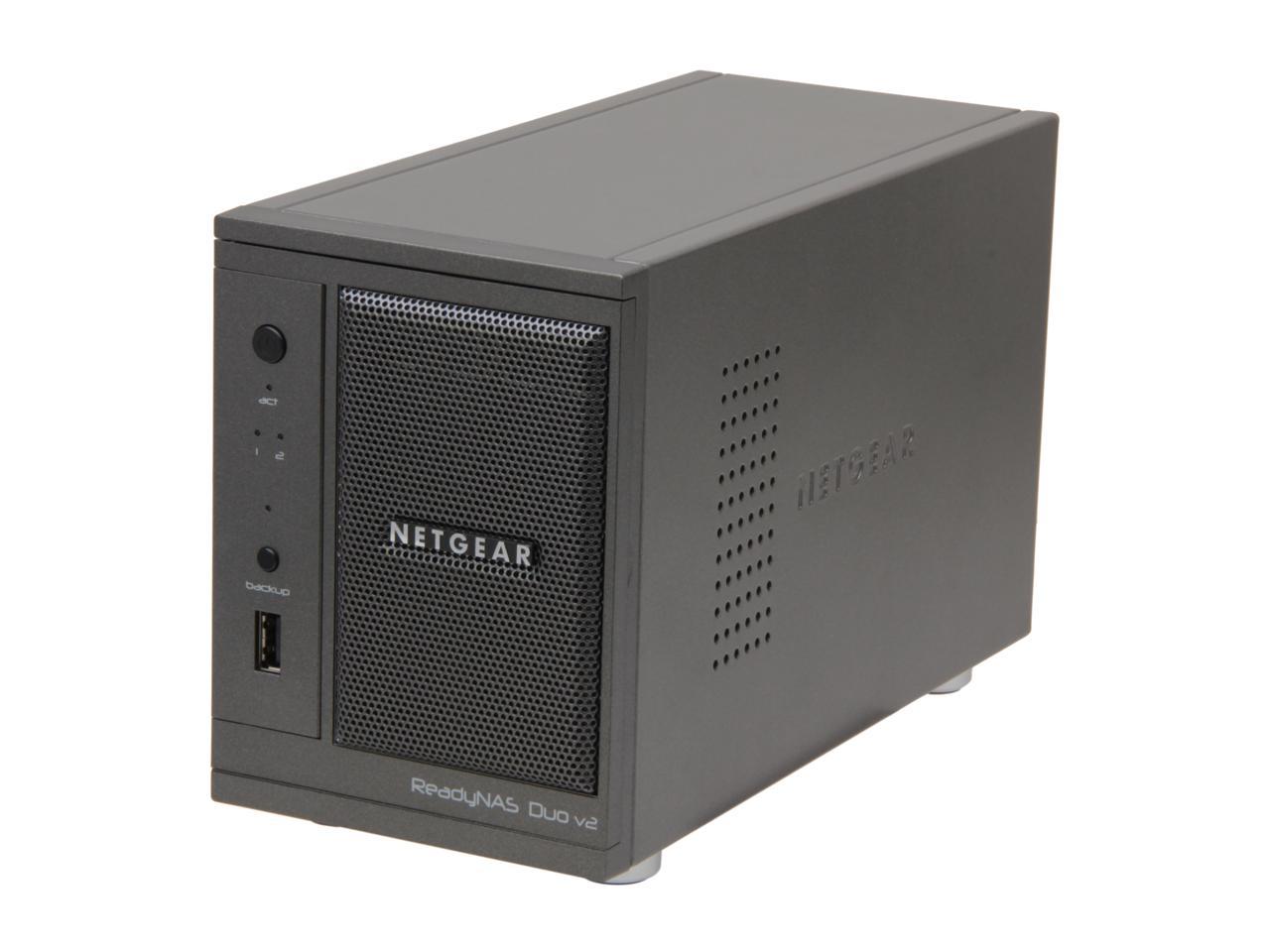 Meet the Netgear ReadyNAS Duo V2 or model RND2000v2 – for those that aren’t aware NAS stands for Network Attached Storage – see them as a hard drive, but accessible over your network (rather than being attached or inside your computer). The ‘Duo’ refers to it having two drive bays, which can be setup on RAID (a mirror of the drives, so if one drive fails, you have a backup).

The drives were not plugged into the NAS when I received them, so I assume they had been taken out to attempt data recovery to no avail - not the best of signs. Since I didn't know if the NAS was dead or if one or more of the drives were iffy I had to start the task with no assumptions. I mounted the drives to the caddies, inserted them into the NAS and attempted to power on. On doing so, noted that the power supply is a non-genuine one...hmm this could be interesting - a cheapo no-brand PSU in a NAS with a habit for eating them. On inserting the power supply into the back of the NAS I feel it's not particularly tight...it's a bit wobbly too (the actual socket on the NAS), but it does power up, so that's something.

Unless you know the IP address of these ReadyNAS, which I didn't, an easy way to find and connect to one once plugged into the Network is by using the utility Netgear RAIDar - it'll list any Netgear NAS on your network, their name, IP address and status, so it's quite handy. You can find all the Netgear NAS utilities on their website.

Result - the NAS lists on the RAIDar utility with an IP address and a name...at least it's alive! And the utility provides a link to the admin page so that's handy so click through...but...problem...it will not open in Chrome, Edge or Firefox and gives as error. It's easy to assume 'ah well, the NAS is dead' at this point but reading the error message, it's an SSL mismatch. Not having used these ReadyNAS for a while now (this one was dated 2011, I think) Google was my friend and found that it will not work in modern browsers because the browsers don't 'trust' the NAS. That's OK, open up Internet Explorer apart from you can't because with recent updates, even if you click on your Internet Explorer icon, it'll open Edge anyway. Thankfully there is a compatibility mode in Edge which is a little flaky at times, but does work to open the admin page, most of the time. So this is your first step to access to your ReadyNas Duo V2 - open the admin page using the Internet Explorer Compatibility Mode in Edge - instructions can be easily found.

And then without warning, the NAS cuts out. Oh no! I power it back on again and it appears to come on...could this be the PSU issues coming to the surface as the client suggested? I refresh the RAIDar app and the NAS is not showing as available and see that the 'busy' light on the NAS is continually blinking so I leave it for a while thinking perhaps it's recovering from the sudden power outage and testing the disks. A few hours later and it's doing the same thing and my instincts tell me to put my ear to the drives. If you haven't worked with hard drives, it is difficult to describe the noises that a drive makes when it's trying to spin up and failing, or hitting bad sections but I will try: Vrrrrrrrrrrrrp click. I try inserting only one drive at a time and it appears to be drive #1 making the bad noises and possibly the reason why the NAS is failing to boot.

Drive #1 removed, powered up and no bad noises, so that's a good sign. I also try the bad noise in the other slot just to make sure it's not something odd with that slot rather than the drive but nope, it fails in both positions. A few tests to confirm this and yes, the drive is not happy, and nor will the NAS boot with it inserted anymore - or perhaps it might eventually, but I don't want to wait nor do I want to have the drives powered up for any longer than I need because the longer they are powered up, the higher the chance of failure if they are heading that way.

Boot up with Drive #2 only inserted and the NAS *should* function with access to the data as long as it was setup with RAID. But then another issue - the RAIDar utility detects the NAS, but as a random name, and Drive #2 not detected - I try a few more times and get a different names and sometimes a 'Firmware Corrupted' message. I put my ear back to the NAS to listen to the drive but cannot hear anything at all which was a little alarming - maybe I have two dead drives as well as a dodgy NAS? At this point I thought about removing the drive and connecting it to a PC (but that's not without its complications because of the filesystem on these drives) but then, without touching the NAS, it powered off again by itself.

What I found was that although the PSU would supply the NAS enough to power up, it would sometimes provide power and the NAS would boot with a message of faulty firmware (and sometimes not) and other times, would not power up the hard drive. I considered obtaining an original power supply and perhaps a new power socket for the NAS but I found an angle for the PSU in the probably dodgy power socket (or perhaps dodgy power supply, or both) which would both power up Drive #2 and the NAS correctly.

I was then able to get onto the admin of the NAS and noted that SMB (Server Message Block - a Microsoft created protocol for providing shared access to files and printers across a network...not related to the SMB used in slang which I won't repeat here, but ends in 'Balls'). That one change could have easily have been the reason why the client no longer had issues with accessing the files or perhaps it's a side-effect of the NAS booting up badly and the the SMB issue was unrelated, who knows. Removed permissions on the shares so a user/pass wasn't required for access as it may make data transfer easier.

The customer handily supplied a known-good USB drive to transfer the data so created a backup job with a small portion of the files as a test - it completed the backup job but when I accessed the USB drive after plugging into my laptop, there is nothing on it, just an empty folder. I was glad I did a test job or I'd have wasted considerably more time to have an empty folder. Double checked that the settings were correct and tried a few more times just in case but despite the ReadyNAS informing me the transfer was complete, there was no data on the USB drive.

Suspecting that this NAS has less than the nine lives of a cat, and could be on it's last I did not want to power off the NAS, take the hard drives out or anything else that involved touching the NAS physically as this may be the chance of getting it powered up. Instead I opted to transfer the data over the network to the USB drive connected to my laptop - not ideal and quite slow, but it'll do as a last resort and it'll be faster than transferring to a server online.

If you attempt to access the shares on the drive via Windows in the normal way (by IP address or share name) you'll meet an error saying the drive does not exist. First thing to check is that you have SMB 1.0 enabled because if not you'll not get very far - so that's your second tip of this article if you are trying to recover data from a ReadyNas Duo or access to the shares in general. Slowly copied over the 2TB of data to the USB drive and voila, data returned to the customer.

The client asked of they could use this NAS and explained that while you could, it would never be reliable even with only one drive and has issues with both admin and share access - it's time let this one go to computer heaven.

It goes to show that sometimes you meet wall after wall of ‘nope’ but armed with information and gaining a little more, using the correct utilities and applying a logical approach those walls can be taken down one a brick at a time.

As a note to processes above of figuring out the multiple issues; if the data was *really* important and I suspected the drives were in bad shape, I would not have had the drives powered up for anywhere near as long as I did. For this client, the data was personal and was a case of 'it would be nice if we could get it back to see what's on there if it’s not ging to cost too much' and so they were warned that the more I try to get the data off, the higher the chance of the drive(s) failing. As it happens there was a whole ton of videos and pictures that they do not have the originals of elsewhere – a happy client.

If the data was critical and the budget permitted I would (after a brief inspection) sent the drives off to East Anglian Data Recovery (EADR) https://eadr.co.uk who do a brilliant job at data recovery far beyond the facilities we have at AJ Computing. EADR come highly recommended from most in the tech industry - use the direct link above rather than searching for 'EADR' because there are some imitators out there that will attempt to lead you astray.

Perhaps you have an old NAS, hard drive, laptop or desktop that you would be keen to get the data off but you are not sure how? AJ Computing would be happy to help. We are based near Grantham/Bourne/Peterborough/Stamford but we also welcome projects nationally – tell us about your issues and we will work something out.